The Wooster Tree Ring Lab has just published a paper with Franklin and Marshall College and The Ohio State University on the climate response of the Dawn Redwood tree. The study site is the beautiful Secrest Arboretum at the OARDC – OSU Wooster Campus. The upshot is that these remarkable and fast-growing trees are clearly doing well and as long as the increase in precipitation that Northeast Ohio is receiving keeps pace with the summer warming they should continue to do well. Why not plant more of these beautiful trees as they thrive, sequester carbon, and provide many other ecosystem services.

The senior author is Lauren Vargo, who is now a glaciologist research scientist at the Antarctic Research Centre in Wellington, Australia. Lauren did much of this work while an undergraduate at Wooster. Lauren is also the recent lead author on this Nature Climate Change contribution. Great thanks to Lauren also for sharing here research this summer.

Here is the technical abstract of the Dawn Redwood paper:

Metasequoia glyptostroboides,a deciduous gymnosperm, also known as dawn redwood, was thought to be extinct until living members of the species were found in China in 1943. Analyzing the climate response of a transplanted stand of the trees can give insights into their physiological plasticity, into their use in restoration and reforestation, as well as into interpreting the environmental conditions of the geologic past from fossil Metasequoia. An annual ring-width chronology—spanning 1955 to 2010 and based on a stand of 19 M. glyptostroboides trees planted in Secrest Arboretum in northeast Ohio, USA—shows negative correlations with maximum monthly temperatures: with the strongest relationship with February and the warm months of June and July, all significant at the 99% confidence levels. A positive May to June precipitation correlation is the strongest moisture signal (p < 0.05) and the narrowest rings in the chronology occurred during the drought of 1987 to 1988, consistent with one of the warmest and driest Junes on record. These results have implications for the future as climate change affects the native and transplanted range of this species. Future response of this species to a changing climate will depend on the relative rates of warming maximum temperatures in the winter and summer, as well as changing moisture conditions during the summer months. 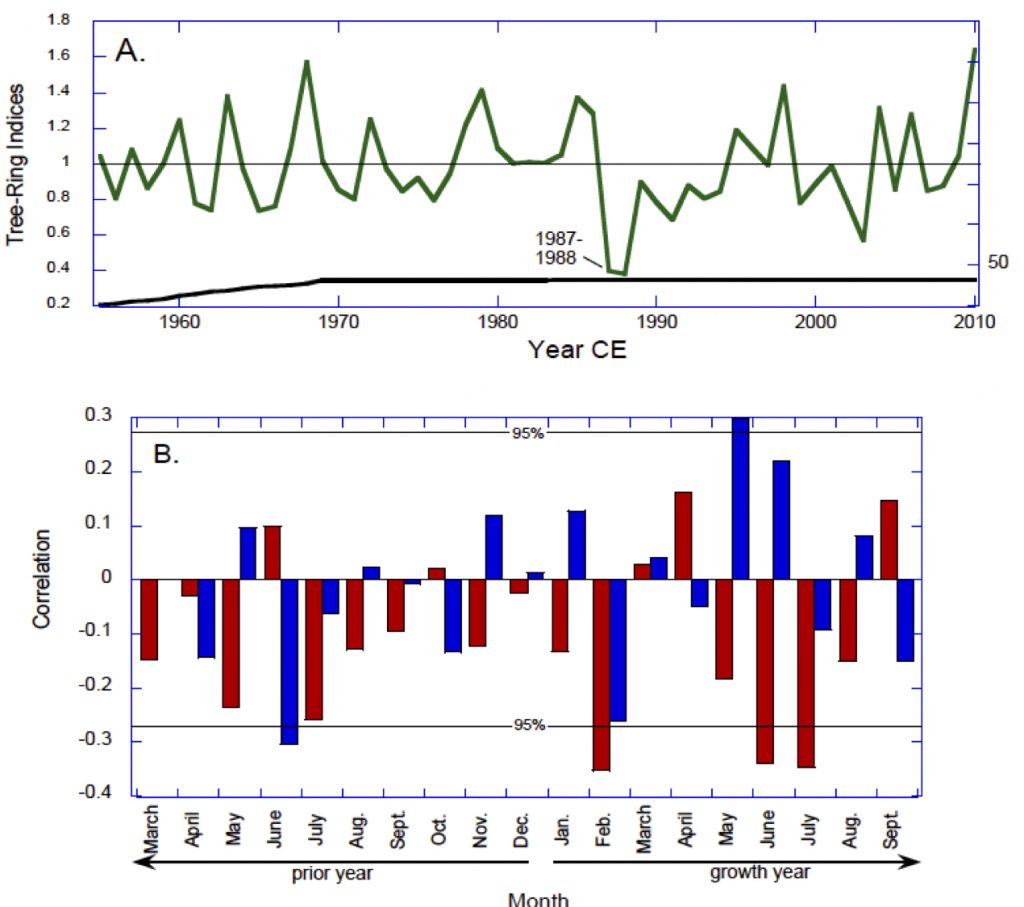 Figure above shows the tree-ring record from a stand of 19 Dawn Redwood trees (upper panel A). The lower blue and red graph (B) is the climate response of the trees – temperature (red bars) is strongly negatively correlated with summer (June and July) temperatures and with February temperature. The summer relationship makes sense as hot summers require higher evapotranspiration demands. The negative correlation with winter is hypothesized to be linked to warming winters leading to less snow cover leaving roots exposed and vulnerable to damaging frosts. This negative relationship may go away as warming continues and frosts become less frequent. 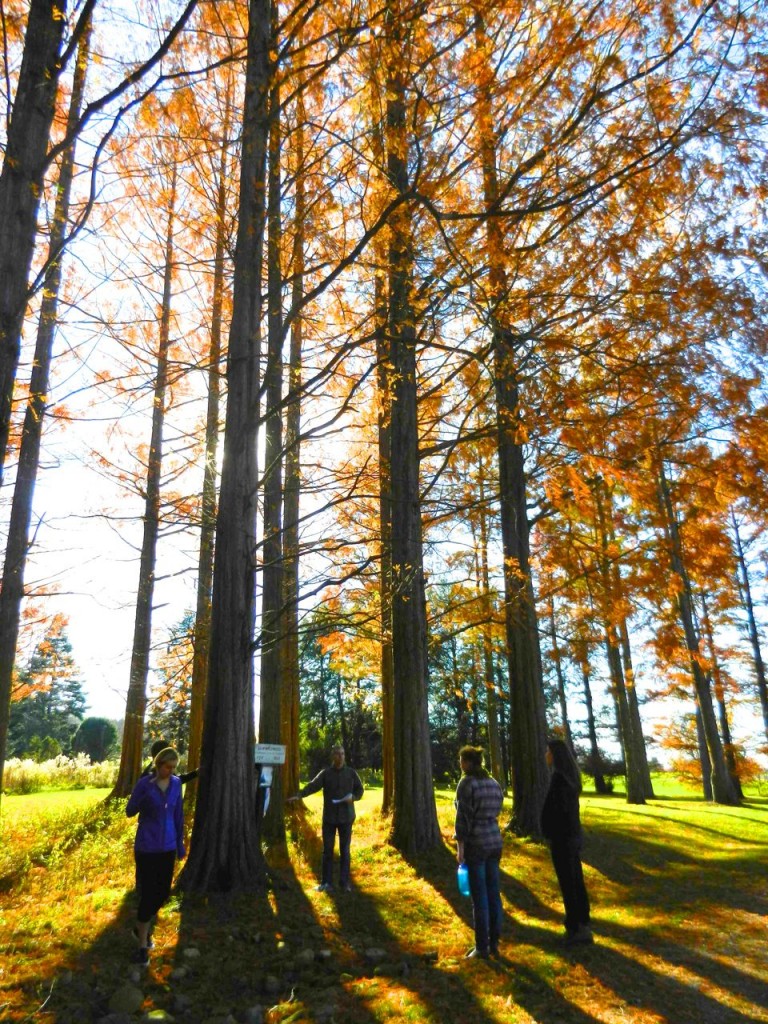 The College of Wooster Paleoclimate class mulls around the Dawn Redwood stand. 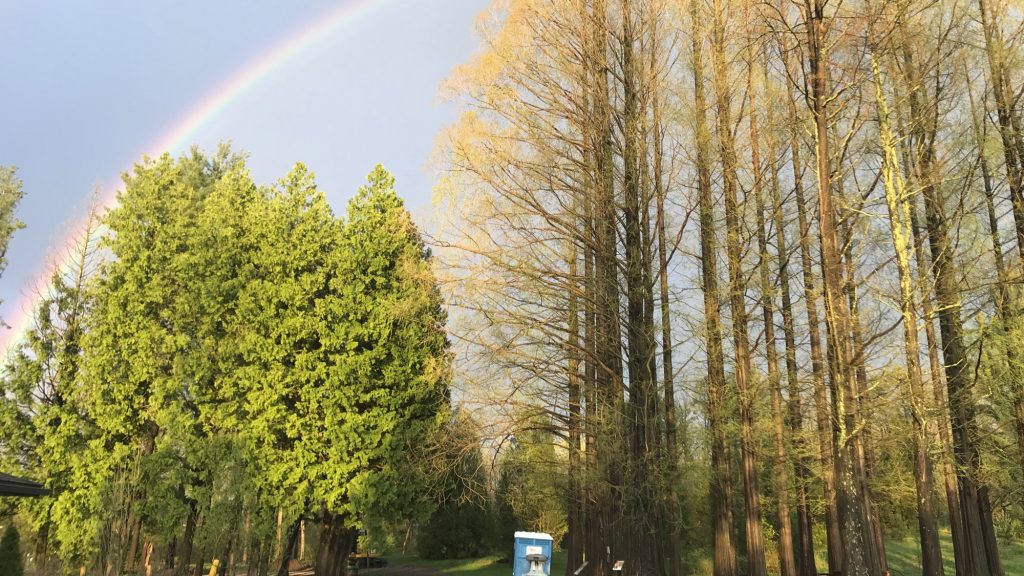 Another great photo of  Dawn Redwoods – they are deciduous conifers so this photo in the early spring before growth.

Many thanks to the Secrest Arboretum for permission to core these impressive trees. We greatly appreciate the support of Jason Veil the Curator of the Arboretum.